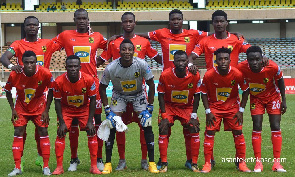 Nkana, come into this match on the back of a 2-1 win over Al Hilal in their last home match in the competition and have not lost a single game at home, in any continental club competition in 43 years.

The win, saw Nkana remain fourth on the group standings, but they are only behind the leaders, Zesco United on goal-difference. The Red Devils have scored nine goals and conceded only two in their last five home games in all African campaign.

After extending contract of their star-man by two years, Nkana would look to Freddy Tshimanga to help his side register another win after he netted against Al Hilal. The inform Congolese attacker has been involved in five goals (three goals, two assist) in his last five matches for side.

Coach Beston Chambeshi would be pleased with the return of his Ghanaian defender Richard Ocran from suspension. Ocran has also penned a two-year contract extension this week.

Meanwhile, Kotoko on the other hand, recorded a 2-1 win over Zambian champions Zesco United at home on match-day two earlier this month. As a result, the Ghanaian giants are placed third on the group standings and they are also behind Zesco on goal-difference.

The Porcupines Warriors have failed to register a goal in their last two visits to Zambia and have also failed to keep a clean sheet either. With the absence of midfielder Richard Senanu, who has been a screen for their defence, his replacement would however be the experienced Jordan Opoku.

Nkana FC have won all their two previous home games against Ghanaian clubs, having beaten Hearts of Oak 2-0 in 1986 and Kotoko 1-0 in 1993, both occasions in the Champions League.

Previous I am more popular than Stonebwoy, Sarkodie– Kwadee
Next 275 persons flee to Ghana over clash in Burkina Faso