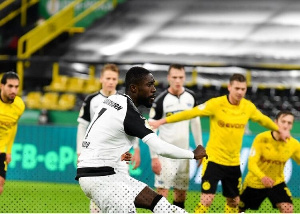 German-born Ghanaian forward Prince Osei Owusu climbed off the bench to score the equalising goal for Paderborn in the German Pokal Cup on Tuesday evening.

Owusu, 24, climbed off the bench to replace Ron Schallenberg on 88 minutes with Paderborn down 2-1 in the game.

Free-scoring Erling Haaland thought he had clinched victory for Dortmund when he scored in stoppage time but in a remarkable turn of events the goal was ruled out after a VAR review for an earlier foul in the Dortmund area, leading to a penalty for Paderborn.

Osei Owusu elected himself and slotted the ball from the spot in the seventh minute of stoppage time to force the extra period.

Despite the dramatic fightback inspired by the Ghanaian, Haaland promptly restored Dortmund’s lead in the fifth minute of extra-time and this time there was no sting in the tail.

Owusu has seen just 202 minutes of Bundesliga II games for Paderborn this season but has failed to start a game so far this season with Tuesday night being his first goal of the season.

He joined Paderborn from Arminia Bielefeld in the summer.

He was not the only Ghanaian in action for Paderborn on the night as his compatriot Christopher Antwi Adjei also featured in the game for the vanquished.