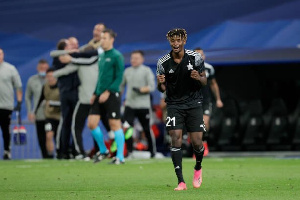 Ghanaian midfielder Edmund Addo will reportedly be handed a late invitation to join the Black Stars for the World Cup qualifying double-header against Zimbabwe in October.

The Moldova-based player is said to have been contacted by the Ghana Football Association (GFA) to join the team’s camp next week for the crucial games.

Addo is coming to replace Alfred Duncan who is injured and will not honour coach Milovan Rajevac’s call-up, having been included in the 32-man provisional squad.

Addo has been in great form this season and his call-up, if confirmed, will be deserved.

On Tuesday, he excelled as debutants Sheriff produced a great upset in the Champions League by beating 13-time European champions Real Madrid at the Santiago Bernabeu.

Addo, usually deployed as holding midfielder, joined the Moldovan champions in the summer and has established himself as a key player.

He hasn’t missed a game this season with a total of 12 appearances so far.

The Black Stars will take on the Warriors on Saturday, October 9 at the Cape Coast stadium on match day three of the qualifiers before traveling to Harare three days later for the reverse fixture.