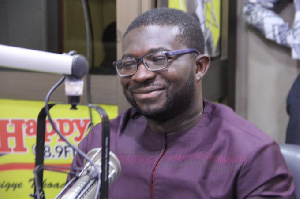 Hearts of Oak Supporters Chief Elvis Herman Hesse says the Chief Executive Officer of Asante Kotoko, Nana Yaw Amponsah is under immense pressure because he raised the expectations of the fans too high after his appointment.

The 2019 Ghana Football Association presidential candidate has made huge promises to turn the fortunes of the club since he took charge of the club.

The Porcupine Warriors have been able to secure some big sponsorship and partnership deals during his tenure but performance on the field has been poor.

With the team’s elimination from the CAF Champions League, pressure is mounting on the CEO to resign or be sacked by the Board.

According to Elvis Herman Hesse, the fans should be patient with Nana Yaw Amponsah and give him more time.

“For me, I will never wish anybody to fail including Nana Yaw Amponsah. Nana Yaw Amponsah has raised the expectations too high and I think that is what is causing the problems,” he told Odiasempa Kwame Oware on Wamputu Sports on Happy 98.9FM.

“I will plead with the Kotoko faithful to give him time since he has a lot of things to bring on board. He (Nana Yaw) should also seek to listen to the people and seek advice when necessary,” he added.