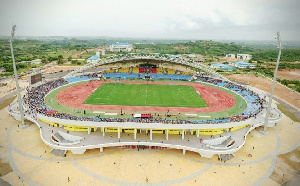 The 2022 FIFA World Cup qualifier between the Black Stars of Ghana and the warriors of Zimbabwe will go as planned at the Cape Coast Sports Stadium, contrary to earlier reports that the game will be moved to the Len Clay Sports Stadium in Obuasi.

Reports went rife in the local media that the game had been moved to the Len Clay Sports Stadium, home of AshantiGold SC, due to the current feud between the Ghana Football Association and the National Sports Authority.

The said feud has been about the organization of the game as the GFA is trying to take over proceedings in the area of match ticketing, accreditation.

These roles have been executed by the National Sports Authority during the 2021 AFCON qualifiers and the two opening games in the 2022 FIFA World Cup qualifiers.

Director-General for the National Sports Authority, Professor Peter Twumasi, has stated emphatically in an interview that there hasn’t been any communication to the operators of the national sports facility concerning relocating the game to Obuasi.

According to him, only a force majeure will call for a change in the match venue; thus, the game will be held at the Cape Coast Sports Stadium.

“As I speak to you, we are currently inspecting the stadium, and everything looks in good condition to host the match,” NSA Director-General Patrick Twumasi told Citi Sports.

“There are so many implications from security to finance that span several weeks before a game of this nature, so unless there is some sort of force majeure, you can’t just wake up with four days to a game a change venue”.

The Black Stars are currently in Cape Coast preparing for Saturday’s game against Zimbabwe in matchday three of the 2022 FIFA World Cup qualifiers.

The team trained at the venue on Tuesday, supervised by Coach Milovan Rajevac.

‘Be proud playing for Ghana’ – Milovan to Black Stars