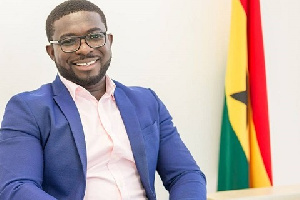 Ghana Premier League (GPL) side, Asante Kotoko has outdoored Football Administrator Nana Yaw Amponsah as the Chief Executive Officer (CEO) of the club at the Sports Hotel in Kumasi on Friday, August 7.

After many months of sealed lips, the club has finally unveiled the versatile administrator to lead the club to achieve success at the local and international front.

Amponsah, who contested in the 2019 Ghana Football Association (GFA) elections and placed third out of six candidates holds a Bachelor of Arts Degree in Psychology and Political Science from the University of Ghana, Legon, and a Master’s Degree in Sports Law and Practice from the Leicester DE Montfort University, UK.

He was also given the opportunity to pursue a Ph.D. in Sports Leadership at Concordia University in the United States of America (USA).

From 2008 to 2018, he was a Licensed Player Agent/Intermediary and transferred over 50 players from Ghana and almost 100 across the globe, which brought huge revenues to Ghanaian clubs in the process.

Nana Amponsah is the Chairman and Founder of Ghana Division One Club Phar Rangers FC from 2016 to present and would step down after the unveiling.

The Prestigious 40 Under 40 awardee, is the Director of Football for Phar Partnerships from 2014 to Present and the Founder and CEO of Cornny Drinks Limited.

The smart and intelligent Phar Rangers FC President, is an expert in the areas of Commercial Aspects of Sports, Sports and Ethics, Sports Governance, Representing the Athlete/Player and Sports Regulatory Regimes & Sports Rights, and ambush marketing.

He declared his ambition to contest the top position at the GFA since 2017 and unveiled his plans, which tackles and gives solutions to the GFA.

He is well prepared to take over the CEO position of the Club and give it the new image and brand identity it is yearning for presently and in the future.