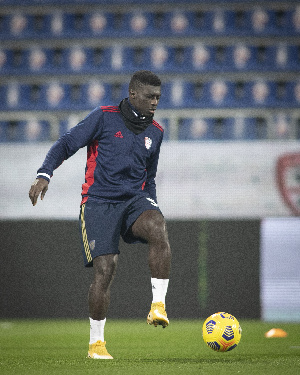 Fiorentina ace Joseph Alfred Duncan has rejected rumours he turned down a call-up for Ghana’s upcoming 2022 World Cup qualifiers against Zimbabwe due to injury.

The midfielder was named in the 32-man squad for the October 9 and 12 Group C doubleheader, the first roster of new Black Stars coach Milovan Rajevac.

The player, however, turned down the invitation, reportedly citing injury but things took an interesting twist on Sunday when he played for his club in the Italian Serie A against Napoli.

“With regards to my absence in the national team, I spoke to the head coach of the Black Stars but there was a miscommunication somewhere but I don’t remember saying I was injured!” Duncan took to Instagram to shed light on the situation.

“Online bloggers academy, get your facts right before putting fingers on a keyboard. If I want to refuse a call-up, I will do so and not by faking injury.”

Duncan’s call-up set him up for a return to international duty after some time in the wilderness.

In a publication on Monday, the Ghana Football Association named the midfielder among five players who have been “excused” from the 32-man squad but gave no details on the reason for their exclusion.

In Sunday’s Serie A fixture, Duncan was named in coach Vicenzo Italiano’s line-up and played for 77 minutes as Fiorentina fell 2-1 at home to Napoli.

So far this season, the 28-year-old has made six appearances in the elite division, starting in four of the matches.

Ghana are looking to secure positive results against Zimbabwe to recapture top spot in Group G.

The Black Stars, who are eyeing a return to the World Cup after failing to do so for 2018, opened their qualifying campaign with a 1-0 home win over Ethiopia to take an early lead at the top of the table.

The West Africans, however, fell to second position on matchday two after suffering a 1-0 away defeat to South Africa.

2022 World Cup qualifier: NSA in ‘accreditation battle’ with GFA ahead of Zimbabwe clash