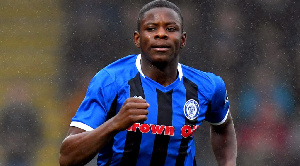 Budding Ghanaian striker Kwadwo Baah will sign for English Premier League side Manchester City at the end of the season.

The 18-year-old reached an agreement with Pep Guardiola’s side on Monday.

Baah’s contract with his current club Rochdale- in League One-expires at the end of the season.

His pre-contract agreement with City will see Rochdale to receive a fee.

Baah is expected to be loaned out next season to him to continue his development.

The Stuttgart-born has scored three goals in 14 appearances for Brian Barry-Murphy’s side in League One so far.