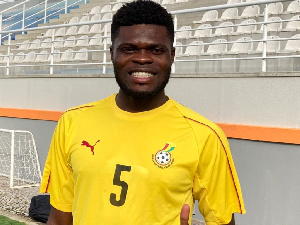 UK-based media giant ‘The Sun’ has been forced to apologize for using intemperate language in a story about Arsenal’s latest signee, Thomas Partey.

Thomas Partey was arguably the biggest player to talk about in the recent transfer window in the UK as Premier League side Arsenal signed the 27-year-old Ghanaian soccer player for 50 million euros [£45.3m].

However, the one story which became the most talked about is The Sun’s news story which described the Ghanaian international as coming from a “poverty-stricken existence” and his hometown Krobo Odumase was also described as a “poor town”.

Many Ghanaians who saw The Sun’s story were not enthused about it as they described the media entity as being racially biased in their reportage even before the footballer had played his first game for the London side.

Dzifa Gbeho-Bampoh, a former Joy News Editor, took the step of writing to the Sports Editor of The Sun to correct the story and possibly apologize for the unprofessional conduct.

“I was offended because we must acknowledge people who have pulled themselves up to become something. By describing him and his hometown in that manner, we denigrate him and his hometown and the larger population of Ghanaians,” Dzifa Gbeho-Bampoh told Joy News. “I was very unhappy about it and I was actually incensed. I felt like if I didn’t write anything, I will just be shouting on social media to no end. So, I lodged a complaint to see whether there will be any difference. I am glad that in the end, they appreciated that there was a need for a more nuanced description of Partey and his hometown.”

The Sun in their reply to the journalist apologized for using clumsy language in what should have been a “positive” story about the player’s rise to the EPL.

“Firstly, let me apologize if our article on Thomas Partey caused offence and or upset. I am deeply disappointed that [the] clumsy language has overshadowed what was meant to be a positive story about Partey’s incredible rise. I have personally amended the article following your complaint and we will endeavour not to repeat the mistakes in future,” Alex Peake, Digital Sports Editor wrote.

Find below ‘The Sun’ reply: 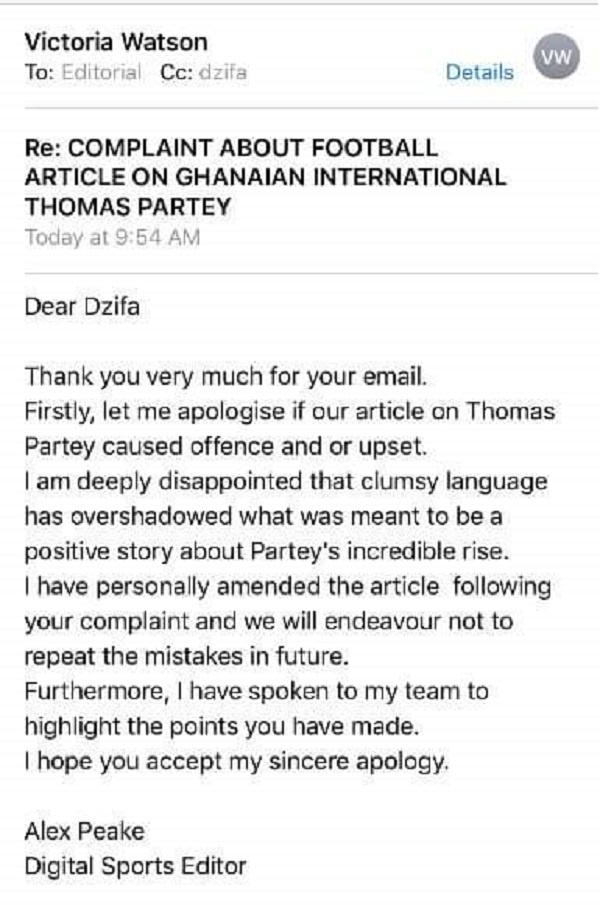 Akunnor: Ghana were not organised against Mali