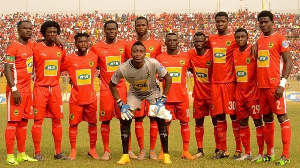 The decision to sack CK Akonnor by the Asante Kotoko management as head coach of the club will be met with elastic aggression from the playing body as some key players in the club are set to push for their release.

FootballMadeIbGhana.com is reliably informed that some of the leading members of the team will be registering their displeasure over the decision by calling for contract termination.

Akonnor’s sacking was met with utter shock with the decision coming less than three weeks after he qualified the team to the CAF Champions League.

The decision, described by many of the clubs fans as ‘madness’ has left football pundits and fanatics completely flummoxed and flabbergasted as Akonnor was tipped as the best managers the club had engaged in so many years.

The management of the club is yet to announce their reason for sacking the manager but footballmadeinghana understands that Akonnor was told to vacate his position to another coach and take up the Technical Director role of the club which he did not hesitate to refuse.

Following the news of his sacking, some of the players who improved and showed a tremendous development in their play under Akonnor have been left disappointed and have hinted of pushing for their release from the club.

Under the umbrella of anonymity, one of the players said: “It’s shocking. I did not believe it when I heard the news. I quickly called some of my colleagues to find out and everyone was shocked. We know ourselves that our play has improved and we were just preparing ourselves for a greater season,” he said.

Another who felt overly disappointed in the decision said: “What is wrong with this club? I have been here for long and we have had many managers but I can say that CK Akonnor and Didi Dramani were the best. Yet they sacked these coaches. It’s sad. I think it’s time some of us leave this club. We have no future here,” he angrily said.

A key member of the team disclosed that many of his colleagues will not renew their expiring contracts with the team and push for their exit in the coming days.

“I spoke to some of my colleagues and almost everyone is shocked. Those who have a year or less on their contracts may not renew because they feel such decisions destroy their plans of achieving something here (Kotoko),” he said.

“We’ll also demand for an explanation from the management. We work together so some of the decisions must be opened to us. The decision makes us feel we are not important,” he added.

CK Akonnor, under two months of his appointment guided the side to the group stage of the CAF Confederation Cup and followed it up with winning the Tier One League of the Ghana FA Normalization Committee Special Competition to secure a ticket to the CAF Champions League next season.