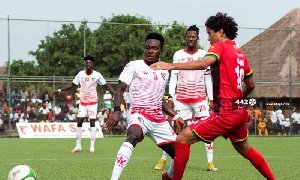 WAFA SC on Saturday afternoon displayed impressive resilience to come from behind to draw 1-1 with Asante Kotoko on matchday 26 of the Ghana Premier League season.

In a game where the Porcupine Warriors needed a win to reclaim their top spot on the league log, they squandered an early lead as the Academy lads came from behind to force the match to end in a stalemate.

On the matchday, defender Abdul Ganiu Ismail opened the scoring from the penalty spot in the 2nd minute of the first half after striker Andy Kumi had been brought down by goalkeeper Osei Bonsu.

With WAFA SC slowly settling into the game, they managed to push the home team into their shelf on several occasions before finally breaching the defense of the Reds.

In-form striker Justus Torsutey rose highest in the final minute of the first half and powered home a header to draw level for the team from Sogakope.

Although both teams had a good game in the second half, neither side had the luck and hence have been forced to settle for a 1-1 draw at the end of the 90 minutes.

Courtesy of today’s draw, Asante Kotoko has missed out on going top of the league table with Accra Hearts of Oak expected to end the weekend as league leaders following their 1-0 win over Techiman Eleven Wonders on Friday, May 21, 2021.

You can also watch this week’s episode of the GhanaWeb Friday Debate with Joel Eshun below: