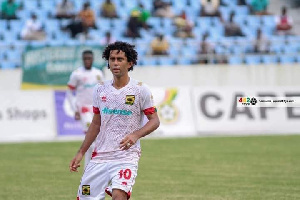 The porcupine warriors had several chances to win the game with Kwame Poku and other players wasting some good opportunities.

Gama’s skill that has gotten social media talking against Ashantigold was when he entered the Ashgold penalty box dropped a shoulder allowing the Ashgold defender Kwadwo Amoako to pass like the wind before crossing.

Hopefully, that skill will be used for the advert reels as the Brazilian has showed he is no slouch since signing for Kotoko.

Related Topics:Fabio Gama
Up Next

Hearts of Oak in big trouble!