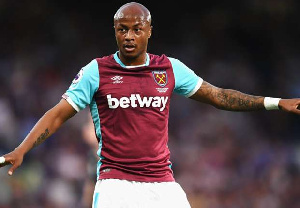 In the summer of 2016, Andre Ayew held the West Ham United shirt after completing his move from Swansea City and was expected to be a hit as he was for the Swans in the Premier League.

That however did not come to pass and the fans still recall his time at the club.

West Ham fan page, COYIrons, asked fans what they think about Ayew’s time at the club.

The comments that came in were mostly negative.

What did you think of Andre Ayew during his time at the club? #WHUFC