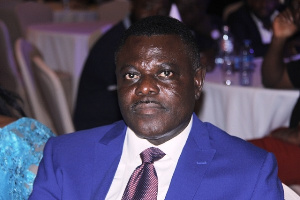 Asantehene Otumfuo Osei Tutu II who is the owner of Kumasi Asante Kotoko has announced a 9-member board of directors to be chaired by Dr.Kwame Kyei because he single-handedly financed the club.

Dr. Kye’s 3-year term as chairman of Asante Kotoko run out some few months ago and he submitted his report to the Asantehene.

A committee was, however, set-up to investigate his administration following an allegation of mismanagement and misappropriation of funds by a section of the media and his former management members.

Otumfuo Osei Tutu II has constituted a board for the club to be chaired by Dr. Kwame Kyei and the letter from Manhyia which confirmed the owner of Unity Oil new appointment stated that he was handed the extension because he single-handedly financed the club for three years.

”Dr. Kwame Kyei, Chairman of Unity Oil Group is retained as Chairman of the Board in recognition of the fact that he has single-handedly financed the Club’s operations over the past three years,” the statement read.

”However, he will now work in a corporate setting with a Board carefully chosen to blend continuity with a combination of corporate dynamism and integrity, financial prudence and professional expertise.”

It continued: ”His Majesty has expressed his gratitude to two eminent bankers and two leading business executives who have agreed to lend their expertise and corporate clout to the Board.

”They are joined by one corporate lawyer and two sports experts, one from Kwame Nkrumah University of Science and Technology and the other a woman physical education specialist from Sunyani Technical University who has worked with the national women’s team.”

Members of Asante Kotoko Board of Directors

PSG goalkeeper wrecks Lamborghini in horror crash while on lockdown