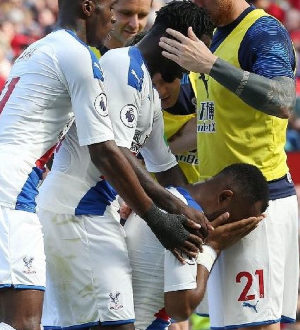 [WHY]: Why Jordan Ayew wept after scoring Manchester United

Jordan Ayew was spotted holding back the tears at Old Trafford on Saturday afternoon after he was overcome with emotion from scoring in the 2-1 win over Manchester United.

The Ghanaian international latched on to a flick by Jeffrey Schlupp before coolly slotting the ball at the back of the net.

The 32nd minute strike was his first league goal since 2 January, 2019 when he netted in a 2-0 win at Wolverhampton Wanderers.

Daniel James’s late equaliser after Marcus Rashford’s penalty miss seemed set to give Manchester United a point but in added time Patrick van Aanholt scored for the Eagles to snatch all three points.

The 2-1 win was Crystal Place’s first triumph at Old Trafford in 15 years.

Jordan who had endured a difficult spell with the London-based side broke down after giving them the lead against Manchester United.