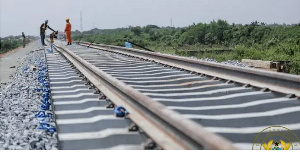 Works on the 83.5-kilometre standard gauge railway line from Kumasi to Obuasi in the Ashanti Region is suffering a major setback as some squatters and residents have placed an interim injunction on the ongoing project.

Asokwa Municipal Chief Executive Akwanuasa Gyimah, speaking on Akoma FM’s weekend political show Wonsom, explained that some residents who have squatted along the rail lines for several years are refusing to vacate the area to make way for the project hence their court injunction.

“Some squatters have settled along the railway line for several years,” the MCE said.

“They have encroached the allocated buffer zone so the assembly and the contractor teamed up to eject, evacuate, and demolish such structures to make way for the project just to realize a court suit by the affected residents.”

He lamented that the injunction has really affected the project.

As part of the government’s moves to revamp the Western Line project, President Nana Addo Dankwa Akufo-Addo two years ago cut sod for work to start on the 83.5-kilometre standard gauge railway line from Kumasi to Obuasi.

But it seems the president’s dream for the people of Kumasi and Obuasi to have a feel of his railway project to boost the country’s transport system may be a mirage because affected residents want the project halted until appropriate compensations are paid.

Mr. Gyimah also added that “the court will sit on the case on March 15 so we hope the case is settled for the project to see daylight because we are already behind time”.

Previous Ablekuma West NPP polling station acclamation turns bloody as one hospitalised
Next Bride in coma, as groom crashes to death on his way to their wedding