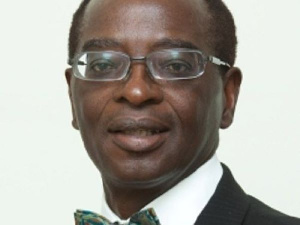 Ranking Member on the Roads and Transport Committee of Parliament has rebuked the Ghana Infrastructure Investment Fund (GIIF) for spending taxpayers’ money on a US$120 million hotel project that is gradually becoming a white elephant.

Aside from the investment in the project, President Nana Akufo-Addo was bashed for offering a tax exemption of US$23,983,033.43 to a company called Platinum Properties Limited (PPL) to put up a hotel facility in Accra, which had one Dr. Kwame Nyantakyie-Owusu, his brother-in-law as one of the partners.

Kwame Governs Agbodza contends that the investment from the fund has virtually become a wasteful expenditure.

According to him, the Pullman Accra City Hotel project has been halted due to various difficulties.

The Member of Parliament (MP) for Adaklu in the Volta Region indicated that officials must be made to account for such decisions.

“Ask yourself if you go to the site of Pullman Hotel whether works are going on for the completion of that hotel. It has been abandoned. Our money has gone there, including tax waivers.”

“NDC is not saying it is not good to support private individuals to build hotels, but you put your investment where you can get the best return,” he said to Citi News.

Pullman Accra Airport City is a joint development between equity partners Inter-Afrique Holdings Ltd and the Ghana Infrastructure Investment Fund (GIIF), which is the private sector-focused sovereign wealth fund of Ghana with diversified interests in infrastructure and tourism.

Two years ago, President Akufo-Addo, came under intense public uproar over the US$23,983,033.43 tax exemption for the hotel facility.

PPL is a Special Purpose Vehicle owned and controlled by Inter-Afrique Holding Limited(IAHL) set up to put up the hotel facility called the Pullman Accra Airport City Hotel. IAHL, on the other hand, is owned by Dr. Kwame Nyantakyie-Owusu, one of President Akufo-Addo’s in-laws. Kwame Nyantakyi-Owusu is married to Regina, the younger sister of Rebecca Akufo-Addo, the President’s wife.

A letter from the President dated November 13, 2019, signed on his behalf by his Executive Secretary, Nana Asante Bediatuo, who is his cousin, to the Ghana Investment Promotion Centre (GIPC) granting the tax exemption reads;

“Reference is made to your correspondence numbered LE09/37P/01 dated November 8 2019, seeking approval for Platinum Properties Limited to be granted strategic Investor status to enjoy exemptions from various taxes in relation to the development of the Pullman Accra Hotel and Serviced Apartments Project in Airport City, Accra (the “Project”).

In light of Article 174 (2) of the Constitution, the Minister for Finance is, by a copy of this letter, hereby directed to obtain the requisite approval of parliament to give effect to paragraph two (2) above.

The Finance Minister, Ken Ofori-Atta, who is also a cousin of President Akufo-Addo, has sent a memorandum to parliament for parliamentary approval to be given for the tax exemption. The memorandum, a copy of which this paper has, also reads:

According to the memorandum, The Pullman Accra Airport City Hotel & Serviced Apartments is a dual-hospitality project positioned to become Ghana’s largest and most distinguished hotel facility.

The memorandum states that the project is being promoted by Platinum Properties Limited (“PPL”), an SPV owned and controlled by Inter-Afrique Holdings Limited (“IAH”) and the Ghana Infrastructure Investment Fund (“GIIF”).

Dr. Nyantekyi-Owusu, is the husband of Regina, a direct sister to First Lady Rebecca Akufo-Addo, and he is the Chairman of Inter-Afrique Holdings, Board Member of BoG. He is said to be building Ghana’s largest and most distinguished hospitality facility.

Pullman Accra Airport City is a joint development between equity partners Inter-Afrique Holdings Ltd and the state-managed Ghana Infrastructure Investment Fund (GIIF). The fund, which is under the Finance Ministry, is a permanent investment vehicle established by statute to lead, promote, facilitate and fund infrastructure in Ghana.

The current arrangement means that the Pullman Accra Airport City Project, being funded with GIIF money, which Ken Ofori-Attah as Finance Minister oversees; is a clear case of conflict of interest.

The investing partners’ interests are held through Platinum Properties Limited as the Project Special Purpose Vehicle (SPV) and asset owner.

The Herald’s finding at the time established other partners in the deal to be SDC Finance & Leasing Services Limited, identified as a non-banking financial institution in Ghana engaged in investment banking services for Small and Medium Scale Enterprises (SMEs).

Concast Limited was also cited in the transaction. It is identified as a manufacturing company set up to produce pre-cast concrete products like floor slabs, column beams, staircases, and wall panels to service medium and large-scale construction projects in Ghana. Its offices are said to be near Tema.

Another company discovered was Platinum Limited. It was said to be involved in real estate and development. Currently, it is said to be developing an iconic high-rise building for mixed-use located in Airport City, the new business and commercial hub of Accra.

The final company involved in the transaction is mentioned as Midway Resources International Limited – an independent oil and gas exploration and development company with a focus on upstream oil and gas properties in the Gulf of Guinea, of which Inter-Afrique Holding Limited is a founding investor. The owners claimed to have offices in Nigeria and Kenya.

These details were captured on the website of Inter-Afrique Holdings, but the site cannot be accessed now. It appears pulled down by its owners, perhaps because of the revelations.

The partnership said they would lead to the opening of the 364-key hotel and serviced apartments, making it the largest hotel and the first dual hospitality offering in Ghana by 2021.

The groundbreaking event followed the signing of the Hotel Management Agreement between Accor Hotels and Platinum Properties Limited on October 2, 2018.

President Akufo-Addo said the project was “in line with my government’s vision of using an appropriate mix of public policy, and public-private investments, to help market the country as an exciting destination for leisure, conference, sports, health, educational and cultural tourism”.

He added that it was going to create 1,000 jobs in the construction phase and employ 546 persons when it became operational.

“For the co-Chair of the Eminent Group of Advocates of the 2030 United Nations Sustainable Development Goals, this is certainly a welcome development.”

President Akufo-Addo said his government was a natural cheerleader for the private sector, “and over the course of the past twenty-three (23) months, we are succeeding in putting in place measures and policy initiatives that are creating an enabling environment for the private sector to flourish”.

He assured the private partners of the project, Inter-Afrique Holdings Limited, that under his watch, Ghana would continue to be a great place to do business.

“It is my expectation that they will be able to address these challenges satisfactorily, for they are all very competent in their domain.

“If it becomes necessary, which I hope it will not, to go higher up the chain of authority, I want you to know that my doors will always be open to you. I do, on the other hand, insist that, on your part, you play according to the rules and regulations of the sector and the country as a whole.”