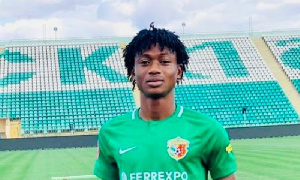 A Ukraine-based Ghanaian defender, Najeeb Yakubu, who was stranded following Russia’s invasion of country has been safely evacuated to Hungary.

The FC Vorskla Poltava center-back is among some 220 Ghanaian nationals evacuated from the conflict region as part of arrangements made by the Ministry of Foreign Affairs and Regional Integration.

This was after he and other affected nationals have complained about their insecurities, calling for immediate help.

“I am about an hour and a half away from Kharkiv, a city that’s been attacked. We’re just confused and we’re stuck here. Nothing is working; no banks, trains, taxis, airports or restaurants, nothing.

“Everything is finished in the shops. We don’t know what to do. We have to move as soon as possible but, how can we? We are stuck here,” he earlier reported.

The Ministry in response to the safety of Ghanaian Nationals arranged the evacuation by land through neighbouring Moldova, Belarus, Slovakia, Romania and Hungary after Ukrainian airspace was closed.

According to reports by Benjamin Yamaoh, a sports journalist with EIB, Star FM indicates that the player is currently safe in Hungary upon his evacuation.

The Ministry of Foreign Affairs has since promised to evacuate more of Ghanaians stuck in Ukraine while those already evacuated are expected to arrive in Ghana soon.