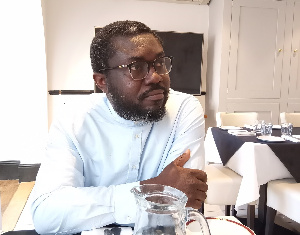 A writ by #FixTheCountry convener, Oliver Barker-Vomawor challenging the jurisdiction of the Ashaiman District Court to try him has been thrown out by the Supreme Court.

The apex court on Wednesday, March 2, 2022, rejected the application on grounds that lawyers for the embattled social activist failed to properly invoke the jurisdiction of the court.

The Supreme Court panel led by Justice Jones Dotse ruled that due process were not followed by the lawyers in the filing of the case.

The panel, according to JoyNews shuddered to understand Barker-Vomawor’s unwillingness to apply for bail at the High Court, Myjoyonline reports.

The report furthered that after the aforementioned intervention by the judges, lawyers of Oliver Barker-Vomawor offered to withdraw the case in which they were alleging mishandling of their clients’ coup case.

Barker-Vomawor’s lawyers were praying the court to make a determination on whether the Ghana Police Service adhered to the tenets of the constitution with its decision to arraign the campaigner at a court that has no jurisdiction over the case.

Barker-Vomawor is standing trial for some comments he made on Facebook relative to the unpopular Electronic Transaction Levy on February 9, 2022.

He was arrested three days later on arrival at the Kotoka International Airport.

The FixTheCountry campaigner on February 14, 2022, made an appeal for the court to grant him bail but that was denied by the court.

Previous Arrest cedi fall! Traders charge Bawumia, as they ask members to hike prices by 80%
Next Serial thief escapes lynching at TTU as he hides in ladies washroom