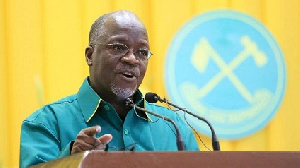 The announcement was made by the country’s Vice President Samia Suluhu Hassan on state TV.

According to her, Magufuli died of heart complications while being treated at Mzena Hospital in the port city of Dar es Salaam.

Magufuli’s death followed more than a week of intense speculation that he was critically ill with COVID-19 — reports that senior government officials repeatedly denied.

He was known as a populist leader who played down the seriousness of the novel Coronavirus pandemic and steered his country away from democratic ideals.

Vice President Samia Suluhu Hassan in her announcement did not specify the nature of Magufuli’s underlying illness, but said that he had suffered from chronic atrial fibrillation for more than a decade.

She indicated that, flags will fly at half-staff nationwide and that funeral arrangement was underway.

John Pombe Magufuli, a trained chemist, was first elected in October 2015 on an anticorruption platform.

He was initially lauded for his efforts to bolster the economy, stem wasteful spending and upgrade Tanzania’s infrastructure.

Tanzania’s late leader was popularly known as “the Bulldozer”. He was accused of muzzling dissent, rolling back freedom of expression and association, and pushing through laws that shored up his Party of the Revolution’s grip on power.