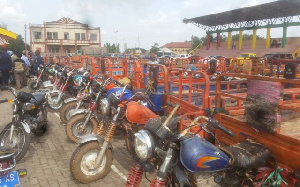 • The riders want landfill sites established in their communities

A total of 12 riders of aboboyaa (tricycles) using the Accra-Tema Motorway were arrested by a special task force stationed along it.

This is as a result of the directive by the Greater Accra Regional Coordinating Council to no longer have aboboyaas use the motorway effective November 1, 2021.

Henry Quartey, the Greater Accra Regional Minister, as part of his “Let’s Make Greater Accra Work Again” campaign, had directed that no tricycle should use the motorway from November 1, while by February 1, 2022, they will not be allowed to use principal streets of the region.

According to a citinewsroom.com report, not all the tricycle riders seem to have gotten the memo yet as a number of them were still seen carting refuse to go dump at the Kpone landfill site.

Mohammed Zakaria Aminu, the Municipal Chief Executive Officer for Ayawaso North, who also doubles as the leader of the task force stationed along the Accra-Tema Motorway, explained the actions that will be taken against the offenders.

“We have to offload the refuse, so we are moving them to the transfer stations and dump them there, and subsequently, the tricycles will be impounded,” he said.

Meanwhile, some of the riders have appealed to the government to urgently provide them with alternative dumping sites in their localities so they don’t have to travel the distance to dump their refuse.

The Informal Waste Workers Union of Ghana, whose members use tricycles for waste collection, have also called on the government to provide waste compactor mobile trucks at vantage points for them.

Funeral of Gbawe chief: Council clash with Mallam traders over closure of shops