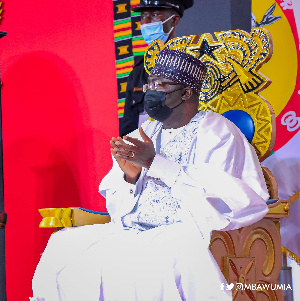 The question of who leads the New Patriotic Party (NPP) in the 2024 polls is gradually becoming clearer if the outcome of the recent Polling Station, Constituency and Regional contests is anything to go by.

Vice President Dr Mahamudu Bawumia appears to be far ahead of his closest contender and Minister of Trade and Industry John Alan Kwadwo Kyeremanten who symbolically was rejected by his own kinsmen.

The Ashanti Region which is traditionally the stronghold of the NPP, on Saturday, May 28, 2022, saw the Bawumia team cruise over Alan as it won all the 10 Regional slots.

Perceived aspirants of Mr. Alan Kyeremanten won nothing as their only hope for Chairman Asare Bediako failed to fly, securing only 20 votes. Another ardent and vociferous supporter of Alan who was eyeing the second Vice chairmanship position, Abraham Boadi secured only 11 out of the over 1000 votes.

Ashanti Regional Chairman Bernard Antwi Boasiako known as Chairman Wontumi who was given a good run for his money, emerged victorious as he retained his seat for the third time with a wider margin