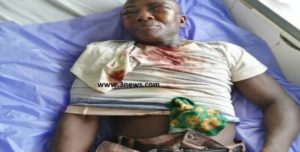 Tension brews in Dixcove after chief beaten to pulp

Tension is brewing in Dixcove in the Ahanta West District of the Western Region following an attack on a sub-chief of Upper Dixcove by some unknown men believed to have come from Lower Dixcove.

Nana Diako Kra was beaten to pulp and was stripped naked by a group of men on Monday, March 15 on his return from that Lower Dixcove.

Reasons for the attack is very sketchy but the Paramount Chief of Upper Dixcove told Connect FM‘s Paa Kwesi Simpson that the attack was unprovoked.

According to Obirempong Hima Dekyi, his sub-chief was on his way home from Lower Dixcove when he was suddenly attacked, stripped naked in full glare of public and subjected to severe beatings.

The victim, with four other members of the royal family, all-sustaining varying degrees of injury, are receiving treatment at the Effia Nkwanta Regional Hospital .

It appears the disturbance that made life unstable for the people of Dixcove has reared its ugly head again.

It would be recalled that in July 2019, a similar incident happened when the Paramount Chief of Lower Dixcove, Nana Kwesi Agyemang, was also abducted, stripped naked and beaten by assailants believed to have come from Upper Dixcove.

The dispute has to do with land at Turom, a community in Dixcove.