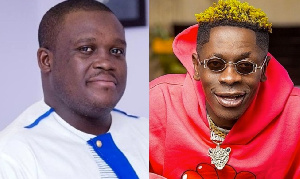 The two have been going on a back and forth following a viral video in which Shatta was seen kissing one of his team members.

In the video which has been making rounds on the internet, Shatta Wale gave out one of his expensive diamond chain to the Shatta Movement member named Kumordzie and kissed him on the lips after.

The video drew wild criticisms from social media and the attention of Sam George, who is a lead advocate for the anti-LGBTQ Bill before Parliament, was also drawn to it.

The lawmaker subsequently concluded that Shatta Wale might have been under the influence of some “wrong leaves” as it is quite unusual to see two men kissing.

In response, a displeased Shatta Wale went on a rant spree using unprintable words on the lawmaker and threatening him in parts.

“That Sam George if you don’t stop those foolish comments about me erh … You go sick for room for years unless I touch you. I never see foolish man like you too before. Prove to me which leave I smoke, you are very foolish a man,” Shatta tweeted.

But in a new development, the Shatta Movement boss has announced that he and Sam George have patched their differences.

“Nice one! I just spoke to Hon. Sam George. It’s all 1 love. Understanding is the key,” he tweeted.