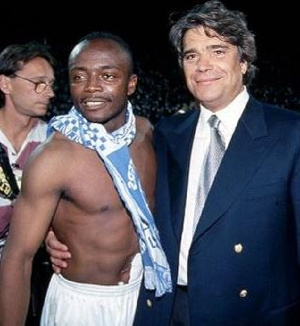 Abedi Ayew Pele is famed for his incredible feat at French side Olympique Marseille. The African football icon won multiple league titles with Marseille in 1991 and 1992.

Abedi Pele also won the UEFA Champions League in 1993 and according to experts, Abedi’s performance in that year is one of the best by an African in the history competition and could have won the Ballon d’OR if African players were considered in the awards.

But these successes chalked by Abedi Pele with Marseille would either not have happened at all or happened at another club but for the cunningness of a French businessman by name Bernard Tapie.

Bernard Tapie, per his own narrative was aware of AS Monaco’s interest in Abedi Pele and asked Abedi to reject any proposal by AS Monaco for him to undergo medicals.

“I told him (Pele) that he will be subjected to a blood test, which is generally done for African players. But he should refuse and say he does not support it,” he said.

Bernard Tapie, who was the president of Marseille then said he went on to leak information to AS Monaco about Abedi Pele’s supposed HIV status.

He added that he told an employee of Monaco about the HIV rumour: “I told him, ‘you know, we have escaped him beautifully. I did not take Abedi Pele. He is HIV positive’, I knew he will betray me and tell Monaco. He did not fail at that. So when Pele refused the medical test, Monaco said: Ah yes, it is true. He is HIV positive, so we won’t take him.”

Monaco then pulled out of the deal which paved way for Marseille to sign him and make him one of the greatest players in the club’s history.