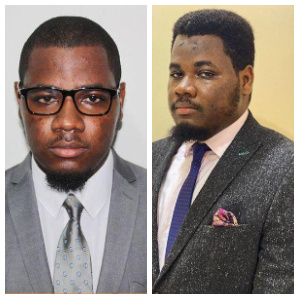 One is named Peter, the other Paul; the twin brothers were among some 7 top students in this year’s batch of First-Class listed law school graduates from the University of Ghana–Legon.

The twin brothers appear to have pursued the same career paths, having attended the same institutions at all levels.

The two, both past students of Bishop Herman College and both pursued courses in Land Economy, gaining a Bachelor of Science Degree each from the Kwame Nkrumah University of Science and Technology (KNUST).

They both also pursued courses at the Ghana Institution of Surveyors and are Chartered Surveyors.

Peter and Paul also have Master of Science in Environment and Sustainable Development from the University College London (UCL).

In a post by the UG Law Students’ Union on Twitter, both twins indicated their aspirations. While Peter aspires to ‘establish the largest law and valuation practice in Ghana and become a justice of the Supreme Court of Ghana, Paul indicated that he aspires to be the best version of himself.

Meanwhile, Davina Seyram Gbedy was valedictorian of the 2022 Batch of Law School Graduates.

Below is the post by the University of Ghana Law Students’ Union that details the profiles of the twin brothers and 5 other First-Class graduates from the Law School – 2022 Class:

Previous PHOTOS: Veteran musician Daddy Lumba opens a radio station
Next WhatsApp will no longer work on these iPhone models