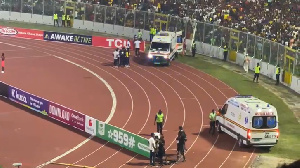 While it is unclear what caused the incident, the Ambulance Service, according to GhanaWeb’s Managing Editor, Daniel Oduro, who was at the stadium “did a good job in their swiftness in dealing with the situation”.

In a video clip available to GhanaWeb, two ambulances could be seen transporting the individuals from the country’s largest stadium with a seating capacity of 40,528 for medical attention.

The Black Stars locked horns with Super Eagles on March 25 for the first leg of the World Cup playoff. The stadium, per the visuals, was full to capacity as thousands of soccer fans thronged the venue to rally behind the senior national soccer team.

The game, however, ended goalless. Both teams will now turn their attention to the 2nd leg expected to come off in Nigeria on March 29, 2022, to determine who qualifies for the 2022 Fifa World Cup.