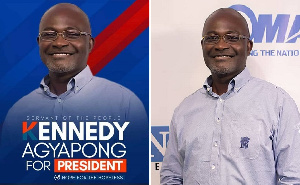 Member of Parliament for Asin Central, Kennedy Agyapong, has advanced that winning an election in Ghana requires winning the Ashanti Region, which is a stronghold of the ruling New Patriotic Party (NPP.)

The lawmaker, who is also aspiring to lead the NPP into the 2024 election, has thus promised to draw the attention of the party to recommit to the region and serve the interests of people there.

Agyapong, was speaking to scores of market women at the Kumasi Central Market on a campaign stop last week when he made the remarks in his address.

After outlining his plans for the traders relative to helping them combat insecurity and address their bad roads, Agyapong spoke of helping with access to MASLOC loans before adding:

“I will go and lobby the leaders to turn their attention to this place, because if you want to win an election, if you win Ashanti Region, then you are done,” he said to cheers and applause in a video shared by the Oman TV channel on YouTube.

Agyapong is one of the leading figures gunning to replace president Nana Addo Dankwa Akufo-Addo as leader of the NPP going into the 2024 General Elections.

Others rumoured to be interested in becoming flagbearer include Vice President Mahamudu Bawumia, Trade and Industry Minister Alan Kyerematen. The primaries are slated for next year.

Watch Agyapong’ address to the traders