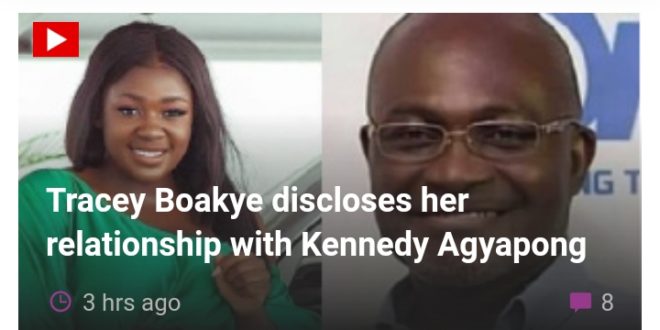 Popular Ghanaian socialite, Tracey Boakye, has opened up on her current relationship with Assin Central MP, Kennedy Agyapong, after they were involved in a feud sometime ago.

Earlier in 2020 during Tracey Boakye’s social media war with Mzbel over a certain sponsor (Papano), several names popped up in the quest to unravel who this particular man was.

Kennedy Agyapong who also waded in the discussion at that time claimed that Former President Mahama was the famous ‘Papano’ that was talked about.

The outspoken MP in a quest to tackle Tracey for what he described as ‘enjoying taxpayers’ money’ rained insults on her and claimed that the former president had even purchased buildings for her in Accra.

Tracey Boakye in a swift rebuttal did not spare Ken’s allegations as she also launched a scathing attack on the MP.

The two later apologized to each other and things were left to die down.

But in the latest development, Tracey, during an interview with Abeiku Santana was asked about her current relationship with the Ken Agyapong and she had this to say;

“The way you lambasted hon Kennedy Agyapong the other time was really serious. Have you apologized to him? I have already apologized on my page. That was after he came out to say it was a lie. I have never ever met Kennedy Agyapong in my life. When there’s an opportunity to meet him, I gladly will.”

Previous From Sulley to Kevin: Five veteran players who could join Ghana’s squad for World Cup
Next Market Women And Farmers Need ICT In The New Economy