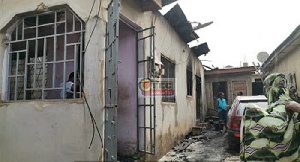 One person is reportedly dead with three others in critical condition after a Trotro driver allegedly set the room of his girlfriend ablaze at Meduma in the Kwabre East Municipality of the Ashanti Region.

The suspect, who was identified as Mr Agyeman, was said to have set himself ablaze after the incident but was rescued and sent to hospital by residents in the area.

The incident occurred in the early hours of Tuesday, March 16, 2021.

The deceased, a 10-year-old boy by named Desmond, succumbed to severe burns while his twin sister, mother and a four-year-old girl are currently receiving treatment at the emergency unit of the Okomfo Anokye Teaching Hospital (KATH).

Mr Agyeman, believed to be in his 30s according to residents used petroleum product to commit the act after he was enraged by a squabble that ensued between him the woman on that fateful day.

Residents who witness the incident said, “we heard Agyeman and his girlfriend arguing but could not tell the exact cause of their fight”.

“My room is next to Agyeman and his girlfriend, I only heard the woman shouting for help, we rushed there only to find out that the entire four-bedroom building was in flames”, he added.

“I suspect him to have used petrol in committing the crime because the scent of petrol was all over the area when I came out of my room”, another tenant also said.

Meanwhile, officials from the Mamponteng Divisional of the Ghana National Fire Service (GNFS) Command in their preliminary investigations have discovered a small gallon of petrol in a plantain farm close to where the case happened.

The suspect is in the grips of the police assisting investigation, while the injured are receiving medical treatment.

The suspect who also suffered severe injuries has been arrested and he is currently receiving treatment at KATH under police guard.

Previous VIDEO: Don’t expect to win a Grammy with ‘useless’ songs like ‘Hajia Bintu’ – Sheldon blasts Shatta Wale
Next Your premature flagbearer campaign could send us into opposition – NPP group to Bawumia