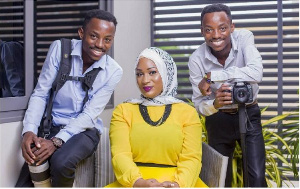 Twins Don’t Beg, Ghana’s golden brand in photography has shared how they were able to land photography deals with the first two families of Ghana.

The dynamic duo, who started working with the wife of the Vice President, Her Excellency Samira Bawumia in 2016 and later worked with the President and his wife made this much-anticipated revelation on Y 107.9 FM during the ‘Weekend Rush’ show with Kokonsa Kester.

According to the duo, they got into contact with the second lady through a friend who knew how active they were in politics on campus and on Facebook and subsequently became her official photographer and toured the country with her during the 2016 campaign.

“We have always been active in politics even in KNUST, after school we became very active on Facebook and then we were friends with the current Deputy Minister, Hon Fatimatu Abubakari and she knew all we used to do both on campus and outside the campus. She contacted us during the 2016 campaign and said she wanted us for a political job, we agreed to it and later met with the second lady and started work with her, touring the whole country on campaigning,” they said.

The duo further mentioned that they were recommended to the office of the president and eventually got contracted.

“With the First Lady and the President, we were recommended to them and they agreed to work with us,” they explained.