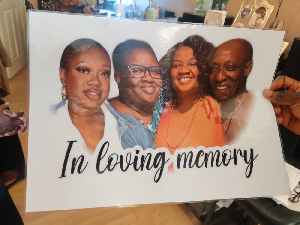 United Nations Ambassador and Founder of Zoe Christian Centre in the United Kingdom, H.E Rev Atta Badu Snr, has commiserated with the family of four persons who were gruesomely murdered by a knifeman in Bermondsey, South East London on April 25, 2022.

The family of the deceased victims, Dolet Hill, 64, Denton Burke, 58, Tanysha Ofori-Akuffo, 45 – also known as Rachquel – and 27-year-old Samantha Drummonds are still battling the shock of losing three generations of family members in such bizarre circumstances. Samantha Drummonds had temporarily vacated her flat for a week due to renovation and redecoration works to spend time with her mother, grandmother and other relatives in Southwark when she met her untimely death.

Rev Atta Badu, who was accompanied by colleague Ambassador, H.E. Doreen Kattah, was received by Mr Daniel Ofori Akuffo who is the father, husband and also father-in law to the deceased victims. Rev Badu stated although the death is a painful loss, the swiftness of the police in handling the investigations is comforting as the murdered persons will get justice.

The UN Ambassador, H.E. Rev Badu, urged the family and well-wishers present to strengthen neighbourly bonds as a community and to seek advice from social services when they suspect anything untoward that may bring harm to their neighbours.

“As the Bible admonishes us to do, let us endeavor to be our brother’s keeper. Their welfare must be of great concern to us. Let us try to strengthen the bond we have with our neighbours and be on the look out to seek assistance and advice from the social services when we suspect that our neighbours are in trouble. That is the good neighbourliness Christ teaches us to practice as Christians,” he advised.

The Founder of Zoe Christian Centre also pledged the support of the church to the family in these trying moments and reiterated the church’s commitment to pray with them for divine consolation.

The four family members met their untimely death when a man believed to be in his 20s stormed the family’s £600,000 home just yards from the Millwall FC stadium and stabbed them. The suspect is currently in the grips of the South London police where Specialist crime police are investigating the murderer.

Leader of the investigation, Detective Chief Inspector Linda Bradley said: ‘This was a truly horrific incident and I fully recognise that the distress for the family and the community will be overwhelming.

We are conducting a thorough and detailed investigation into the facts and we are appealing to anyone who can assist with any information to come forward.

“If you know anything or saw anything that you think might help us piece together the events which led to this, then do not hesitate, please call police. You can also call Crimestoppers if you do not want to give your name. We deeply appreciate all the help we have already received from local people, and I would like to thank them for their patience and support in what is likely to be a protracted inquiry.

“We are moving as fast we can at the scene, but we need to ensure we uncover all the facts and secure every bit of necessary evidence, and this may understandably take some time. We are aware that we have family, friends and a community that are all asking questions, we are determined to give them the answers they deserve as soon as possible.”

Meanwhile, tributes have been pouring in for the bereaved with many describing them as lovely and amazing. A neighbour said ‘They were amazing people. They never had problems in the house — I’ve been living here for years. They never had any issues. She did lots of charity. I believe she was a nurse or a carer.

‘She was fighting cancer, she was doing her treatment. She was super happy because she was winning her battle”, she eulogized.