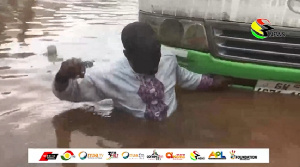 Journalists would go the extra mile to make their reports worth the time, and perhaps catch the attention of the powers that be to act swiftly and change the narrative.

Among others, they would attempt to paint a picture of the enormity of the situation, capture the story with their cameras and in extreme cases, put themselves in the shoes of victims by experiencing the nuisance while on location.

Onua FM’s Captain Smart’s audacious attempt to report from STC yard where the flood had reportedly destroyed documents and tables was one that required a ‘rescue team’ as it appeared the broadcaster could not have extricated himself from the flood without assistance.

As captured by his media house, Captain Smart who donned a white kaftan with definitions on the chest, got stuck and had the water above his stomach level while on his knees. Moving steadily to avoid casualty, the journalist held an STC bus that had been parked in the rain with his left hand and stretched forth his right hand for support. He was assisted by two men clad in casual wear.

Speaking to the journalist, a lady believed to be a staff of STC said “all the papers are wet, all the job cards and the tables have been destroyed by the rain.”

Tuesday’s rainfall followed another torrential downpour on Saturday. A joint team of military and the National Disaster Management Organisation (NADMO) are on a rescue mission after the torrential rains that destroyed several properties and caused inconvenience to many.

“We have deployed a team to Alajo, Tetegu STC junction, and Cantonments. At Cantonments, for instance, 48 Engineers team have also joined in. Some people had been trapped in their homes, and so our men had to go and rescue them,” Public Relations Officer for the National Disaster Management Organisation, George Ayisi, is reported to have said in an interview on the Citi Breakfast Show.

“We work in partnership with stakeholder agencies such as GMet (Ghana Meteorological Agency) which gives us the updates, 48 Engineers, and the Ambulance service amongst others. We have had preparatory works, and simulation exercises towards some of these happenings. When anyone reaches out to us, we will contact and deploy our men to come to their aid. For now, we are focusing on rescuing victims. When we are through with that, we will assess the situation and determine how we will go about providing relief items,” he added.

Meanwhile, the government has said it has spent GH¢450 million towards addressing flooding in the country in the last five years.

“What we’ve done is to provide some remedial measures, and that is to mitigate the effects of the huge running water. In the last five years, the government has spent GH¢450 million to invest in the expansion of the drains including digging deep and concrete lining and that is to increase the drain capacity to carry more stormwater.

“There are some causes of flooding; indiscriminate dumping of solid waste in our drains and the haphazard development of our communities [which must be checked]. Those buildings in unauthorized places should be removed,” Minister for Works and Housing, Francis Asenso-Boakye reportedly said during a tour of some areas in Accra following Saturday night’s downpour.