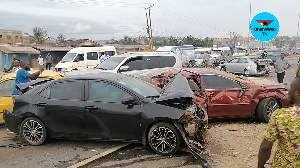 VIDEO: 7 cars in rear-end collision after tipper truck rams into one

7 cars have crashed in a rear-end collision on the Anyaa-Awoshie Road in the Greater Accra region. This was after a tipper truck rammed into one of the cars from behind.

The accident occurred in the early hours of Thursday morning.

Even though at the time of the accident no death was recorded, many were badly injured at the accident scene.

An eyewitness who was at the scene in an interview with GhanaWeb said, “… the car was behind us and I think his break failed, or he was asleep. He was driving at top speed, so the truck hit the other cars and climbed the pavement. It hit a first car and that one hit all the others and it followed in that sequence and people in the cars including a trotro were injured.”

Another witness said,” we were coming from Awoshie and all we saw was a tipper truck that had failed break coming to our end crashing cars, he knocked a car and it affected all of us, my car has been damaged but luckily for me I was unhurt. Two people we think are dead but we cannot confirm,” another eyewitness told GhanaWeb.

The injured people were captured being taken to the hospital in an ambulance.

Meanwhile, the police are yet to give an update on the accident.