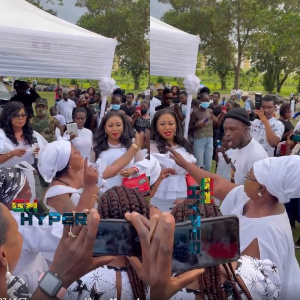 Ghanaian socialite and TV presenter, Afia Schwarzenegger, landed a slap on a man’s face during her father’s funeral.

The funeral took place at the Kwame Nkrumah University of Science and Technology Park.

In a video that was shared on Instagram by blogger, GHhyper, it is unclear what may have transpired between Afia and the young man who donned a white shirt, black shorts and a kujay on his head.

According to some reports shared by some people which is yet to be confirmed, the young man made a move to collect wads of cash that were showered on Afia Schwarzenegger.

In some reactions shared under the post, some social media users have shared mixed reactions to the video since it was shared on March 13, 2022.

A user said, “Funny how opana come take slap for free… If ibi me, unless them all beat me for there…”

While another added, “Someone’s funeral you want to take her money, she no slap him well.”

The unidentified man was later seen playing one of the instruments at the funeral.