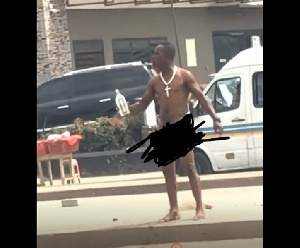 There is growing public frustration over the impact of the punitive measures being implemented in line with the ongoing SIM re-registration exercise.

As earlier announced by the Ministry of Communications, persons with unregistered SIM cards effective the beginning of the week have been restricted from some mobile network services such as outgoing and incoming calls.

Some of these frustrated customers have reacted furiously to this development. In a video sighted by GhanaWeb, an aggrieved customer whose line was blocked is seen invoking curses in the middle of a highway.

The furious customer is seen fully naked in the video which has since gone viral on social media, wielding a bottle of gin with which he recited incantations to invoke curses over his blocked SIM card.

In a similar incident, another video shows a scene of pandemonium in the office of a service provider.

An angry customer is seen in the video engaging in a heated confrontation with security officials at the office.

On Friday, September 9, 2022, when GhanaWeb visited the Akweteyman and Kwame Nkrumah Circle branches of MTN where hordes of customers had massed up, some of these customers expressed displeasure about suffering the punitive measures despite successfully registering their SIM Cards.

According to some of the frustrated customers who spoke to GhanaWeb, they started experiencing a cut in mobile services such as outgoing and incoming calls.

This the customers said is having significant effects on their personal and working lives.

“I have had to leave my work just because of this. We are wasting productive hours for something that is due to no fault of ours,” a customer at the Akweteyman MTN office said.

Meanwhile, visiting the Kwame Nkrumah Circle branch of another service provider, Vodafone, there was relative calm with little number of customers present for their SIM registration.

Some of these customers included those who had suffered the punitive actions for not registering their SIM cards.

In the case of Vodafone customers, there were no incidents of registered users suffering the punitive measures.

Meanwhile, the Minister of Communications and Digitalisation, Ursula Owusu in a Facebook post has stated that there will not be any extension to the September 30, 2022 deadline for the registration of SIM cards.

“I informed the media during my most recent meeting that the SIM registration exercise would not be extended past September 30. After evaluation at the end of August, it has been determined that starting the disciplinary steps outlined in the NCA press release is prudent.

Additionally, any SIM that has not yet been completely registered will be unable to use voice and Internet services. Afterward, using unregistered SIMs will be more expensive. At a subsequent press conference in September, the full scope of the sanctions will be revealed. If you suffer that fate as a result of your own inaction, kindly do not blame your service provider. To be forewarned is to be forearmed,” the minister said.

Previous VIDEO: King Charles III’s maiden address to the nation and the Commonwealth
Next Three die as UEW-branded bus crashes at Apirede