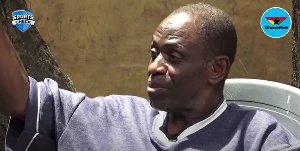 Legendary Ghanaian footballer Mohammed Polo has downplayed suggestions that a spell has been cast on the Black Stars by some aggrieved ex-footballers.

For more than 38 years, the nation has tried unsuccessfully to win the Africa Cup of Nations title.

There have been near-misses with the Black Stars reaching the semis of the competition six times in the last seven editions.

The team’s struggle to win trophies has been attributed to curses by some ex-players who continue to harbour resentment over the nation’s treatment of them.

Polo does not agree that the team has been cursed but holds that the lack of appreciation for their sacrifices is reflecting on the team.

He adds his beloved Hearts of Oak to the teams suffering this fate due to unfulfilled promises.

‘I wouldn’t say so but it reflects. Even Hearts of Oak, it is affecting them. Recently, the 64 battalions came out that they were due some monies for winning the Confed Cup but it never came. This one will reflect. We were promised estate houses in 1978 but we were not given. It is the former President, John Mahama, who gave us something,” he said.

Polo also appealed to the GFA to make use of the experience of the retired footballers.

“We’ve given our best to Ghana football and we are still giving our best but if they refuse to allow gifted and knowledgeable ones put in their knowledge, we will go with it,” he said.

Previous Do not fall into the trap of Ponzi scheme operators
Next VIDEO: Sad News As Heavy Tunder Strikes Obinim’s Church