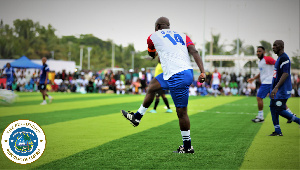 An African president on a football pitch would not be a far-fetched sight because most of them do hit the pitch to give a symbolic kick once in a while.

Over in Liberia, the country has a former footballer as President and so it is hardly any surprise when George Weah joins his former colleagues on the pitch.

A viral video, first shared by a Liberian journalist, shows the president hit a long range belter that ended up in the net. He is congratulated by members of his team as the onlooking crowd cheered.

About the charity match

An African legends side made up of Asamoah Gyan, Jayjay Okocha, Emmanuel Adebayor and El Hadji Diouf, defeated President George Weah’s XI in a charity match for the dedication ceremony of the Invincible Sports Park in Liberia.

The African legends earned a 4-3 victory in what turned out to be a very competitive encounter.

Senegalese star, El Hadji Diouf found the second goal when he rounded the goalkeeper to make it 2-0 for the African Legends.

A defensive howler from Adebayor gifted George Weah’s side an opportunity to pull one back in the game.

Diouf grabbed his second goal in the game when he beautifully dispatched a pass from Jayjay Okocha to make it 3-1.

Two goals from President George Weah and another from a teammate got Weah’s team back in the game.

However, the African Legends showed their dominance as they carried the day with another goal despite missing a penalty.

Watch video of the match below