Home / ENTERTAINMENT / VIDEO: I paralyzed my mother ‘spiritually’ for beating me at age 13 – Bishop Bonegas 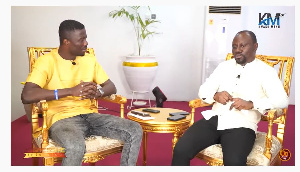 VIDEO: I paralyzed my mother ‘spiritually’ for beating me at age 13 – Bishop Bonegas

Dr Bishop Bonegas, the founder of the Great Fire Pentecostal International, has narrated how his mother became paralyzed because of his “spiritual gifts”.

According to him, he started performing miracles at the age of 10 because he possessed a special power, hence he was tagged as a special child.

He made this disclosure in an interview with Kwaku Manu, monitored by GhanaWeb.

At the age of 13, he told Manu that the special powers he had increased so much that whoever he touched was healed or anything he uttered came to pass.

As a young boy, he cursed his mother when she beat him mercilessly for stealing meat from his stepfather’s food.

Just a day after his pronouncement, his mother became paralyzed for one month.

“My mother was married to a man who lived at Kwahu Atuobikrom. He already had a wife. There were no cars, main roads and lights in that village. He had his own big farm, a very typical village.

“I was taken there at the age of 6…Even though there were lots of idol worshipping, I had the hand of God on me…I started performing miracles at the age of 10. The sick were healed after my touch at Kwahu Apradan…I remember my mother beat me mercilessly at age 13 for stealing the meat from my stepfather’s food. I developed a lot of scars and bruises.

Bishop Bonegas reiterated that his mother became okay after he laid his hands on her to pray for her.

Tags 13 AGE at BEATING bishop Bonegas FOR I me my;mother paralyzed spiritually'