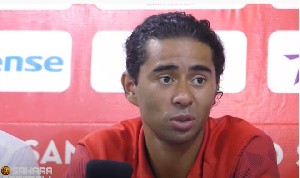 VIDEO: I used my intelligence – Fabio Gama on controversial penalty

Brazilian midfielder, Fabio Gama has revealed that he used his intelligence to win the penalty for Asante Kotoko in their game against Hearts of Oak on matchday 24 of the Ghana Premier League.

Asante Kotoko were awarded a penalty in the 16th minute in the Super Clash against Hearts of Oak and Cameroonian attacker, Franck Etouga slotted it home to give Kotoko their first home win over Hearts of Oak in about 5 matches.

While many football fans believe that the penalty decision by referee Kennedy Paddy was controversial and soft, Fabio Gama believes that he used his intelligence to win the penalty should be acknowledged instead.

During the post-match interview with the media, a journalist asked the Brazilian, “For the penalty decision it looked very soft from where I was standing…Is it something you learn at training that when I am going to the game, I have to be soft?”

However, Fabio Gama responded and said, “These are what I call intelligence. The guy just told me a foul is a foul.”

Meanwhile, Accra Hearts of Oak have written to the Ghana Football Association to protest the performance of referee Kennedy Paddy in their defeat to Kumasi Asante Kotoko on April 10, 2022, at the Baba Yara Stadium.

Tags I INTELLEGANT MY used

Previous Forex and the Bible: How Holy Book foretold investment
Next Ckrowd Announces Appointment Of Renowned Entertainment And Music Personalities To Advisory Board