Home / CRIME & PUNISHMENT / VIDEO: Inside story of the man who allegedly hired robbers to attack his ‘father’ 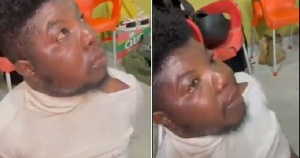 VIDEO: Inside story of the man who allegedly hired robbers to attack his ‘father’

A recent viral video caused stirs on social media with reports that a young man had been arrested for contracting armed robbers to attack his own father.

In one of the videos, 30-year-old Stephen Gyedu in what is seen as an interrogation, is heard admitting to the plot to rob his own father while blaming it on hardship.

Following the report, Oman Channel has visited Lomnava, the community where the young man and his supposed father who had recently returned from the United States of America are residing, and picked up some information providing details around the incident.

Speaking to some residents in the area, they disclosed that the suspect is actually not a biological son of the man he had intended to have robbed.

The residents including some tenants living with the suspect and his “father” disclosed that Stephen Gyedu came to live with his “father” who is a pastor after playing instruments in his church.

The suspect was adopted by the man he had intended to rob and was treated like a son by same.

The pastor along the line travelled to the United States of America but kept Stephen and another adopted son in his home and placed the two in charge of his affairs.

His recent return however led to a plot to rob him of the money he had returned with as confirmed by one of the viral videos which captured an audio of Stephen Gyedu speaking on phone with the supposed robbery gang he had sought to contract.

“Tell us everything including exactly where the money is hidden. We wouldn’t want to talk to you when we come. We might even have to assault you a little, so give us the relevant information now,” the supposed robber is heard directing the suspect in a voice recording.

Gyedu who seemed bent on carrying out the plan replied stating, “I sleep in the same room with my father. We have rented out other parts of the house. But in the night, everyone is usually in their room. Nobody comes out. It is a story building and we are on the top floor while the tenants occupy the down floor”.

One of the pastor’s adopted sons confirmed that the his ‘father’ had actually bought a car for Gyedu who was making a living out of it as a ride hailing driver.

“As for my father he has gone back. He went on Monday,” the supposed son was heard saying.

The car of the suspect, a Toyota Vitz with registration number GW 4006 – 16 was captured parked in the house.

Meanwhile the Ghana Police Service administration has directed an investigation into the viral video of Stephen Gyedu being interrogated and assaulted by some officers.

According to the police service, the assault meted on the suspect during the interrogation goes against the standard dealing with suspects in relation with their human rights.

“We would like to state unequivocally that the Police abhors the maltreatment of suspects and therefore outrightly condemn the treatment of the alleged suspect,” the police said in a statement.