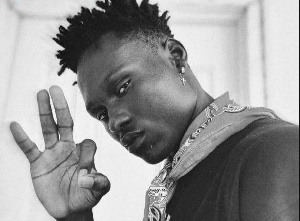 A member of the ‘Asakaa’ group under the ‘Kumerica’ movement, Jay Bahd, has asserted that the leakage of his sex tape sometime in 2021, did not warrant public condemnations.

He made this statement in an interview with Delay, whiles supporting it with a popular verse in Black Sherif’s ‘Kweku the traveler’ song – “Of course, I f**ucked up…who never f**cked up hands in the air.”

Earlier in March 2021, the rapper shared a video of himself receiving a ‘blow job’ from an unidentified young girl.

The video which was first leaked on his Snapchat wall, made its way unto other social media platforms amidst wild public chastisement.

It can also be recalled that shortly after that particular incident, Jay Bhad took to Twitter to share a post in which he expressed no remorsefulness.

“I only sex to release stress,” he earlier tweeted.

But in a new development, Delay has disclosed that Jay Bhad received strong backing from his mother when that particular incident occurred.

“When your sextape leaked, your mother praised you. She said you did nothing wrong and that you are not the first person whose first tape has been leaked. Do you think your mother gave you the wrong advice?

“My mother’s advice was not a bad one. If a child urinates on his or her mother’s lap, it is not cut off but instead, cleaned. What is yours is yours. I’m my mother’s child and that remains a fact.”

Reacting to claims that he deliberately leaked that particular tape, the ‘Condemn’ hitmaker said: “It wasn’t deliberate. Of course, I f**cked up. Who never f**cked up hands in the air.”

Jay Bhad’s statements received cheers from his other ‘Asakaa’ team members including, Cityboy, O’kenneth, Reggie, and Kwaku DMC who were also present during the interview.