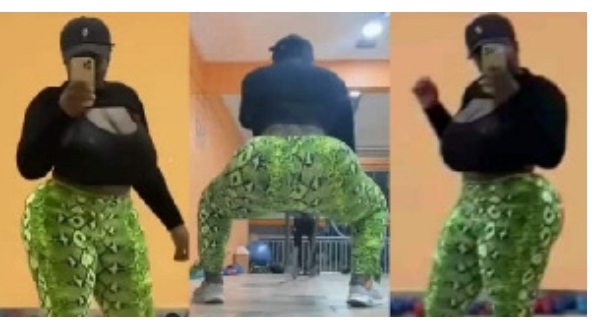 Popular Kumawood actor, Maame Serwaa’s abrupt change from a modest lifestyle to a complete ‘slay mama’ is a whole conversation that has engulfed social media for a while.

It has been the case that in the past she was used as a precedent for her colleague, Yaa Jackson, who has worn the ‘bad girl’ tag with a badge of honour.

But it appears Maame Serwaa has gradually joined the league of the most talked socialites in the country with her lifestyle change.

First, there was a wide range of public speculations that Serwaa has gone through some body enhancement procedure due to her sudden snatched waist and hourglass shape.

Then the conversation shifted to her constant flaunting of curves and showing off the skin on social media which landed many in shock.

But Maame Serwaa perhaps is enjoying the public attention as she has dropped another video that captures her at the gym working out seductively.

In parts of the video, she was seen taking mirror selfies and admiring her curves while she placed focus on her butt.

In another part, she placed the camera right under her bum as she did her squats and this has caused a stir on social media.