Home / GENERAL NEWS / VIDEO: Man who killed his wife is running his business, relaxing in a hospital – Afia Schwarzenegger alleges 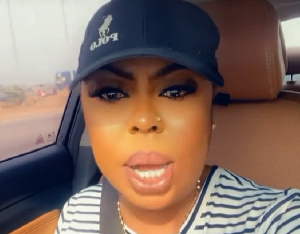 VIDEO: Man who killed his wife is running his business, relaxing in a hospital – Afia Schwarzenegger alleges

According to her, Charles whose freedom should be restricted has been permitted to run his normal business, receive calls among others from a hospital instead of being in police cells.

It can be recalled that Prince Charles Dedjoe was charged with murder for allegedly beating his wife Mrs. Lilian Dedjoe to death.

There were reports that the Madina district court presided over by Her Ladyship, Maame Efua Tordimah remanded Charles to police custody after which he is scheduled to reappear on March 22.

But in a new twist to events, Afia Schwarzenegger is alleging that the suspect is relaxing at a private hospital in Madina.

Afia who claimed to have made thorough checks on the matter says:

“Some of our policemen in Ghana have reduced the police academy to nothing. The man who was claimed to be arrested is at Yeboah Hospital receiving calls.

“Per my checks, the guy says he won’t receive strange calls that could make it easier for the courts to track him. Someone who was claimed to be remanded into police custody has been given a phone to receive WhatsApp calls and run his business as well. A man who has killed someone’s daughter has been allowed to do what he likes.

“In Ghana here, until we have policemen who are willing to enforce the laws, we will continue to suffer. Domestic violence will never come to an end,” she added.

Tags GIRLFRIEND HIS killed man WHO