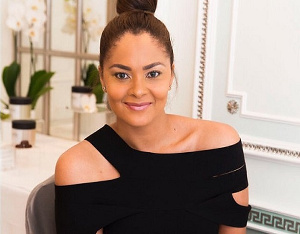 He that finds a good wife finds a good thing and receives the will of Lord Jehovah, says Proverbs 18:22. This biblical verse seems to have been applied in the life of Sulley Muntari after meeting his wife during Ghana’s maiden appearance at the FIFA World Cup.

The year 2006 was a triumphant year for Ghana in its footballing history as the Black Stars qualified for the country’s first-ever FIFA World Cup tournament held in Germany.

It also created opportunities for the players to taste the Mundial and also test their mettle against the top guys at the World’s most prestigious football tournament.

Many of the careers of most Black Stars players who featured in the 2006 World Cup saw a sharp progression but for Sulley Muntari, the Mundial in Germany meant more to him because he met his current wife around that time.

“I met him (Sulley) in Germany, Berlin to be specific, I was on vacation with my sister, and my cousin is Ama K. Abebrese. At that time, we were in Europe so we went to watch the football match and I met him. I think it was during the World Cup,” Manaye Donkor revealed while speaking on the Delay show.

Sulley Muntari and Menaye Donkor have been married for the past twelve years and on this episode of GhanaWeb’s profile features, Joel Eshun profiles the stunning and enterprising wife of the Accra Hearts of Oak midfielder.

Menaye Donkor is a Canadian-born Ghanaian businesswoman who was born on March 20 in 1981. She was named Miss Universe Ghana 2004 and represented Ghana in Miss Universe 2004.

She was brought up by her parents in Accra, Ghana, and is the youngest of seven siblings with four brothers and two sisters. At the age of seven, Menaye inherited the job title of “Royal Stool Bearer” from her paternal grandmother, who is the Queen mother of Agona Asafo.

Donkor received her childhood education in Ghana, lived and studied in Boston, Massachusetts, USA, during her high school years, and moved back to her birthplace in Toronto to study marketing and business marketing at York University, where she graduated with honors.

How she met Sulley Muntari

Menaye Donkor met Sulley Muntari for the first time in a hotel lobby where she was having dinner with her sister Ama K. Abebrese. Ama K. Abebrese introduced Sulley to Menaye. Sulley spoke to her on Ama K. Abebrese’s phone for a month. They maintained their friendship for eight months,” the former beauty queen told Delay in an interview in 2017.

What drew Sulley Muntari closer to her

“Sulley has empathy towards people. Sulley supported her charity and brought his footballer mates on board. He always loved and adored her family as his own.”

How long did they date before getting married?

Sulley proposed to Menaye after a serious relationship for two years. Menaye rejected his proposal because she wasn’t ready and wanted to know more about the former Black Stars midfielder but accepted his proposal to marry him two years after rejecting the earlier proposal.

Menaye is a Christian married to a Muslim. Sulley believes there is only one God and Menaye believes the respect and love for each other and the respect for God was enough for them to marry.

Walking down the aisle

Menaye has a good relationship with her in-laws. As the Ashanti customs demand her father gave Sulley the list of things to buy for the marriage and opted for a traditional ceremony.

They registered their marriage even before the traditional marriage. Menaye always wanted to have a white wedding but such ‘frills’ have not happened due to her relocating to a new home each and every time.

The couple have two children after twelve years of marriage. Their first child came in 2015, named Jamal Krasie Muntari. Menaye in 2020 confirmed the birth of their second child in an interview with GHOne TV.

Watch her interview with Delay in the post below and also check out some of the photos of the couple:

Previous 3 brothers drown at Odo River at Barekese in the Ashanti Region
Next VIDEO: I once suffered emotional abuse – Popular media personality recalls