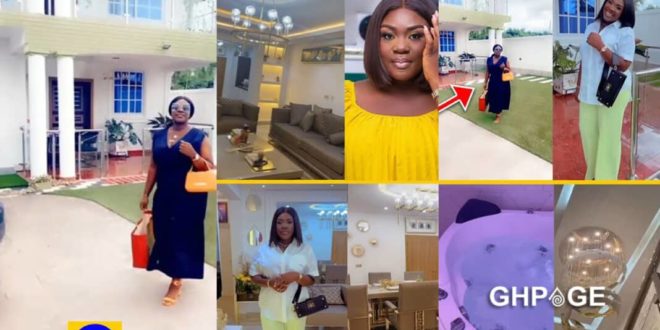 Kumawood actress, Emelia Brobbey has for years led a private life, arguably, by keeping her family, especially her children away from social media although fans have been wanting more from her.

A viral video making rounds on social media has offered followers a tour inside her mansion.

Netizens have congratulated the actress for being able to erect such an edifice despite living a ‘lowkey’ life unlike some of her colleagues who love to flaunt their wealth and properties on the gram.

Emelia Brobbey’s mansion believed to be in the capital has beautiful interior décor.

The white-themed home has several details right from the artwork to furniture, lighting and a huge portrait of Emelia that hung in her living room.

The video also highlighted her washroom which included a jacuzzi.