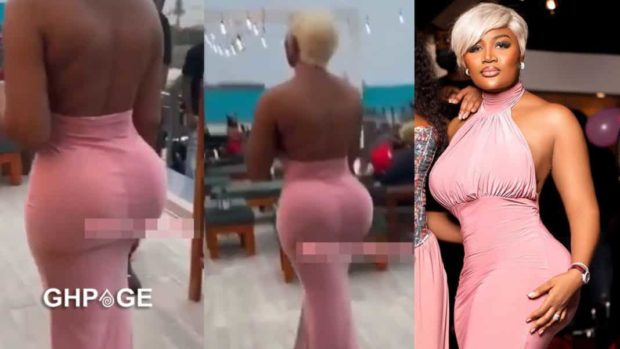 Sandra Ankobiah has succeeded in getting Ghanaians to talk about her once again after putting her heavily pumped up butt on display for the cameras.

The lawyer and entrepreneur attended a party last Sunday dubbed ‘A Brunch in February’ and made sure to steal the spotlight on the night with her choice of outfit.

Sandra Ankobiah abruptly became the subject of discussion on social media after a video showing her strutting at the venue and exchanging pleasantries with some patrons popped up online.

Looking classy as always, Sandra was captured wearing a pink floor-length figure-hugging dress that accentuated her voluptuous figure that couldn’t be ignored.

Her backside, which has always been the number one centrepiece of her anatomy, appeared bulkier, heavier, and rounder than usual, raising doubts about its naturality.

SEE THE VIDEO BELOW

Social media users have speculated that the lawyer-turned-slay queen has gone under the knife again to inflate her buttocks to make it bigger.

Some have even suggested that she may be on a mission to overthrow repented socialite Moesha Buodong, her best friend Salma Mumin who have all been alleged to have gone under some form of cosmetic surgery to enhance their body.

Check out some of the comments sampled below:

missnadiagh: “Always flaunting that thing behind her for attention. I am very she did her own at Obenfour or Nigeria, bcuz the Turkey ones Serwaa’s and Kisa’s looks natural. I dey shy give her mpo.”

nyarko02037: “No man there is looking at her mpo, this women are disgracing The universe paaaaoooo,why. Killing your future because of men, we’re waiting for your old ages.”