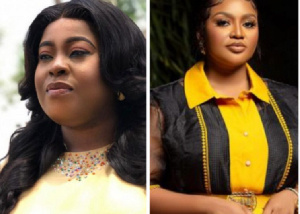 Popular Media personality, Amanda Jissih, has shot down claims that the root cause of her feud with MzGee is because they both wanted the same man.

During a discussion on UTV’s United Showbiz, Amanda was asked to explain why she and MzGee have been hostile towards each other in recent times, to an extent that they both snubbed each other at an event.

Before Amanda was preparing to make her submissions, Bulldog who was also a panel member interrupted and claimed that he heard rumours that Amanda and MzGee fought over Mr. Mark Okraku Mantey who was then the head of programmes for Hitz FM.

Bulldog said he was reliably informed that the cause of Amanda and MzGee’s feud is because they both loved Mark Okraku, who is currently the Deputy Creative Arts minister.

“Okraku? Never! We never chased after Okraku Mantey. MzGee even married when we were all at multimedia.”

Amanda Jissih, however, established that all efforts to patch things up with MzGee has always proved futile.

“Anytime I greet her, she snubs me and it went on for so many months but I didn’t take it personal and I stopped. It’s not the first time, anytime she sees me at events, she snubs me. Even if she makes mistakes, I can’t pick up a phone and call her and she won’t welcome me,” she stated.