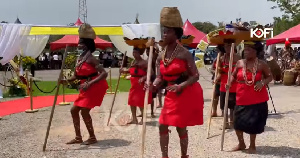 The funeral ceremony of the late Dzifa Aku Attivor, which was held at the forecourt of the statehouse in Accra, witnessed the display of rich ewe culture.

Carrying baskets on their heads and adorned in red and black Kaliko cloth with beads to match, some attendees were captured in a full cultural display at the funeral grounds.

Backed by drummers, this group of dancers, as part of the funeral rites, sang and put up a series of dancing skills including the ‘Agabadza’ and ‘Zigi’ dance of the Ewe people.

The late former Transport Minister hails from Abutia Teti in the Volta Region, and as such, the ewe culture was fully represented.

She has since been laid to rest in her hometown after a pre-burial ceremony at the forecourt of the State House in Accra.

Dzifa Attivor served as a Deputy Transport Minister and subsequently as a substantive minister under the late President John Evans Atta Mills and the former President John Dramani Mahama from 2008 to December 2015, respectively.

Some National Democratic Congress (NDC) stalwarts, including the Speaker of Parliament, Alban Bagbin, former President John Mahama, General Secretary, Asiedu Nketia, and others were present to pay their last respects to her.

Previous Vehicle carrying 88 parcels of narcotics ‘branded MTN’ impounded, two arrested
Next VIDEO: This is why Akufo-Addo flew to Kumasi with Serwaa Broni in the presidential jet