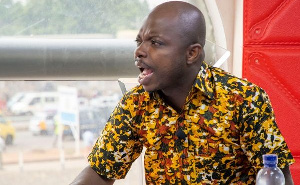 VIDEO: What Abronye said about John Mahama that caused his police invitation

The Bono Regional Chairman of the ruling New Patriotic Party, Kwame Baffoe, alias Abronye DC, has been given up to 4:00 pm to report to the Accra Regional Police Command.

His invitation contained in a release by the police dated Tuesday, February 15, 2022, is in relation to some comments he made during an interview with an Accra based radio station.

According to him, the former president in pursuit of the agenda has recruited #FixTheCountry Convener, Oliver Barker-Vormawor to implement the plot through the socio-political movement he leads.

He made these allegations while commenting on the recent arrest of Oliver Barker following his threat to “do a coup” if the E-Levy bill currently before parliament is passed.

According to Abronye, the embattled activist served as a Senior Legal and Policy Advisor during the erstwhile Mahama government and that having lost his job following the exit of Mr Mahama from office, Oliver together with the former president have plotted the coup to afford a comeback to government.

The host sought to inform Abronye of the argument of lack of capacity being made in defence of Oliver over his coup threat but the party chairman retorted saying “those who have the capacity and have asked him to do it with their support is John Mahama.”

Pushed to provide evidence to back his claim, Abronye said “John Mahama was the one who made him a presidential staffer. Having been out of the office without a job and the opportunity to steal state money, his master has asked him to try the coup because it is the shortest way for them to come back to power. Is it not John Mahama who has sent him then?

“The evidence is in the fact that every time he posts on his Twitter page, it is John Mahama and NDC people who support him. When he recently threatened the coup John Mahama was the first person to tweet that he should not have been arrested. That means it was John Mahama who was imploring him to conduct the coup with his support. When you see John Mahama walking, his face looks coup-like, he is friends with coup. It is in his house that they made the plot. The main financier of #FixTheCountry is John Dramani Mahama so if the convener threatens coup who is behind it. Even when they go on a demonstration anywhere in Ghana it is John Mahama who takes up the cost?” he alleged.

Meanwhile, the police in its release said the essence of its invitation extended to Abronye is to solicit his assistance in investigating his allegations.

Listen to Abronye’s interview with Hot FM below: